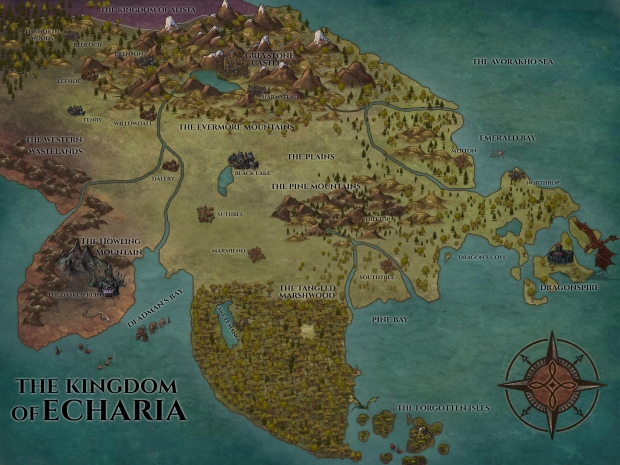 The Kingdom of Echaria is a vast place, bordered on three sides by water, and on one side by the Kingdom of Alista. There are three major mountain ranges in the kingdom- The Evermore Mountains, The Pine Mountains, and the Western Mountains in the Wastelands. The center of the kingdom is mostly flatlands.

Echaria has three large peninsulas that each differ greatly. To the West there is the Western Wastelands, which is home to the Howling Mountain and the old Daskuji Stronghold. It is a harsh desert environment, with no settlements.
The South is home to The Tangled Marshwood, an unforgiving jungle environment that men fear above all else. The jungle is said to be filled with dark magic and terrifying beasts of lore. It is the largest of the peninsulas.
To the East lies the Emerald Peninsula, a richly populated, thriving area that is known for its major trade ports and the mermaids that live in Emerald Bay.

In Echaria Rising, Adelaide and her companions journey South from the town of Redloch in the NorthWest corner of the kingdom, on the edge of the North Woods. They make their way through the Evermore Mountains and down to Lake Lemange in The Tangled Marshwood. This journey takes about 6 weeks on foot and horseback. 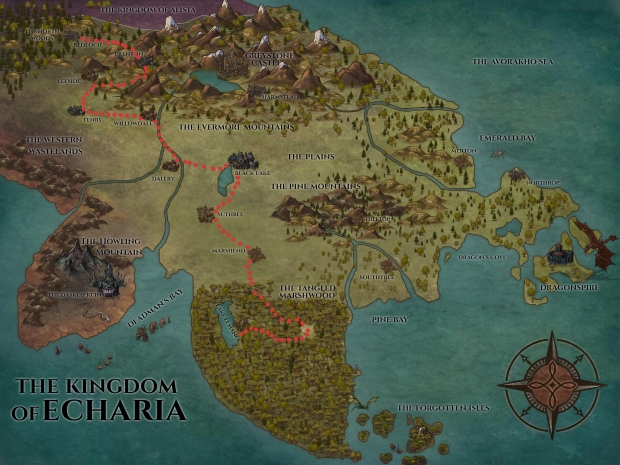